The KFC EXO-M music game app was a limited time promotional app utilized by Yum! Brands, Inc,. China Division for their limited time run promotion even in early 2015. The app featured the popular Korean/Mandarin boyband EXO and allowed players to play a music game along with some of the bands greatest hit songs. It was also a delivery method for special unlockables and coupons that players would be able to obtain only through the app; and by purchasing and scanning the collectible EXO-M toys available at KFC China restaurants. Peak Pixel Games was sub-contracted to provide the level design and assist in the motion capture direction. In addition, Peak Pixel Games also implemented a dynamic camera system in each level which was inspired by watching Korean pop concert videos. This system provided procedural camera behaviors each time a song would be played. This ensured that no performance was the same as a previous one, and simulating a more concert video type of performance. 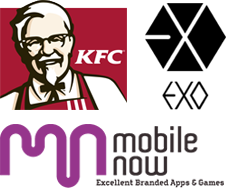 We would like to thank Yum! Brands, Inc,. China, and the MobileNow Group Shanghai for giving us the opportunity to participate in this project.